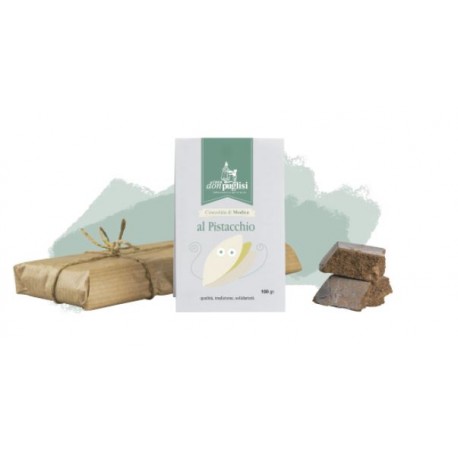 Chocolate of Modica to the Pistachio

From the particular processing of the bitter cocoa paste of the highest quality and first grade cane sugar, we obtain this legendary shiny black parallelepiped of chocolate obtained from the processing of cocoa paste and brown sugar with pistachio

The Modica chocolate has ancient origins and finds its roots in what is known as "the people of the fifth sun", who ruled the Aztecs in Central and South America from the thirteenth to the sixteenth century. Were the Spanish who through Hermes Cortes, around 1519, imported the first cocoa beans during their domination in Sicily it XVI century, the Spanish introduced it in the "County of Modica"; County largest of the Kingdom of Sicily, this also to be appointed as "The Kingdom in the Kingdom." In the County of Modica no man passed through to industrial processing, thus retaining the centuries until today the authenticity and purity of ingredients and the craftsmanship of its manufacture. His processing, which takes place in cold, allows him to remain unchanged its organoleptic characteristics so enjoy full flavors and fragrances, is dark black color with brown reflections, rustic, almost raw, with coarse sugar granules left that confer, in addition to the particularities in taste, a brightness of reflections almost like "marble stone".
Quantity: 100g
Ingredients: Cocoa paste, brown sugar, pistachio 16.7%
Cocoa: 50% minimum
Producer: Casa Don Puglisi - Modica RG

14 other products in the same category: